BROOMFIELD — If there were any nerves about playing in the playoffs, they were gone pretty quickly for the Holy Family Tigers.

The second-seeded team in the Class 3A playoffs scored on the opening play of the game, just 14 seconds in on an 80-yard catch and run by Oscar Sena that set the tone for the night. The Tigers never looked back and routed the Cougars 41-6 to advance to the semifinals.

“That set the tone for sure,” said Sena, who finished with five catches for 164 yards and two touchdowns. “After that, I knew we had this and just had to keep pushing and we are going to do good stuff here.”

Holy Family (7-0) advances to the semifinals where they will meet the winner of No. 6 Lutheran and No. 3 Durango. That game will be tomorrow in Durango. The most likely scenarios are if Durango wins they would come to Mike G. Gabriel Stadium next Saturday for a 1 p.m. game and if the Lions win, it would be a Friday rematch down in Parker.

The Tigers took advantage of a patchwork Evergreen side that was missing several key offensive starters and already up 14-0, Holy Family’s defense nabbed the first of its five turnovers early in the second quarter.

Low and behold it was Sena, who started getting snaps on the defensive side of the ball midway through the season to sure up the secondary, picked off Cougars second string quarterback Kyle Solawetz and set the Tigers up deep in Evergreen territory.

“The jolt for me is scoring the touchdowns and that gets everybody’s attention,” said Sena, whose defensive backfield mate Blake Neece also had a fumble recovery and an interception. “But I like getting those picks too.”

Trevin Johnson, who finished with 79 yards on 18 carries, punched it from six yards out to put Holy Family up 21-0 early in the second quarter.

Evergreen workhorse on Friday night was senior Noah Mertens and the stout running back got the Cougars on the board just before halftime to cut the lead to 21-6.

The Cougars would get no closer. Michael White was exceptional on Friday night, going 12-for-16 for 243 yards (he even recorded his first reception of the season, getting under a batted ball for a two yard catch) and four touchdowns. In the second half, he hit Liam Gray for a 14 yard score and then Sena one more time from 32 yards out to build the lead to 34-6 in the fourth. 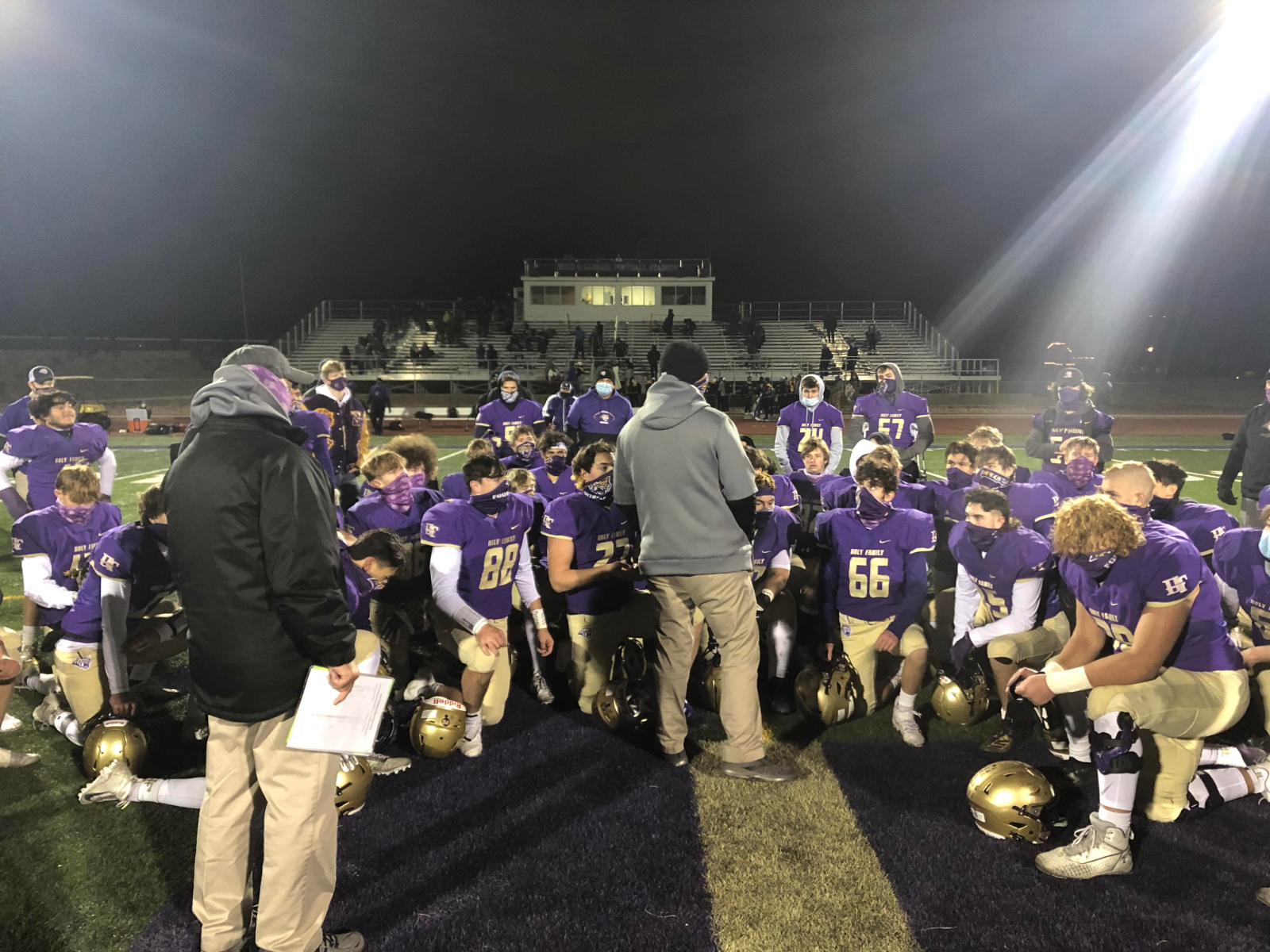 “All the focus is week by week. Just got to keep your head down and move forward,” Sena said. “This is in the past, no we keep moving.”

Gray capped the scoring on Friday night with a 17 yard end around and accounted for 17 more Tigers points, brining his season total to a team leading 111.