It was a season full high and lows for coach Mike D. Gabriel and his Holy Family Tigers.

“We played the toughest schedule in the classification,” Gabriel said. “And then we wrapped it up with playing the best team in the state.

“I’ve never seen anything like that on this level.”

The Tigers held their own against some of the state’s best teams. They played four Class 3A quarterfinalists – Mead, Frederick, Pueblo South and Discovery Canyon during the regular season — and then defending Class 3A champion Palmer Ridge in the first round of the playoffs. Throw in the mix a 4A playoff team in Skyline as well.

It was a schedule that was tough enough to help them earn a spot in the playoffs despite their 5-5 record. The Tigers strength of schedule gave them a chance.

Holy Family closed out the regular season with back-to-back wins against Northfield and Skyview to get back to .500 and earn a trip to Monument for the first round of the playoffs against Palmer Ridge. 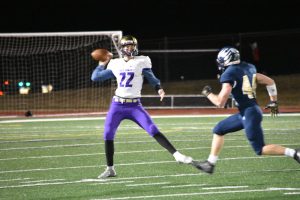 The Tigers were quickly dispatched from playoff contention, losing 63-7 to a Bears team that went on to win their third straight Class 3A title.

The team was led offensively by senior Calahan Carter, who completed nearly 60 percent of his passes (155-for-259) for 2,622 yards and 25 touchdowns. Junior Trevin Johnson was the workhorse in the backfield, accounting for 1,170 total yards out of the backfield.

The Tigers had seven players make the North Metro League All-Conference 1st team, led by junior offensive lineman Cord Kringlen – who will be back to anchor what is sure to be the strength of the team next season. Also making the list were Johnson, Carter, Peters, kicker Liam Gray and linemen Wally Blackmore and Brody Welch.

The Tigers had a brilliant run that ended too soon after a tough playoffs draw.

It earned them the No. 7 seed in the 32 team Class 4A state tournament draw and an opening round match against Centaurus. But the Warriors, who would go on to make a run to the quarterfinals, played an outstanding game and ended the Tigers season with a 5-0 rout at Mike G. Gabriel Stadium.

The sour taste in their mouths will remain, but coach David Martinez would love nothing more than to focus on all the things that went right for his team this season.

“It’s all a learning experience and we just have to come back next year and prove that this season wasn’t a fluke,” said Martinez after the match.

Junior Dylan McIntosh led the team with 15 goals and was named the Tri-Valley League Player of the Year. He recorded hat tricks (three goals in a game) three times. Senior Cole Greany, one of four All Conference selections – along with defenders Alex Troso and Kyle Pardoe – finished with nine goals. So too did freshman Alden Bennett.

The Tigers graduate just two seniors, Greany and Troso, and have a chance to make special runs each of the next few seasons.

The Tigers have built something special on the diamond.

Coming off their first Class 4A championship, expectations were through the roof for Mitch Martinez and his young 2019 squad.

Holy Family rolled through the regular season, suffering just one loss to eventual Class 5A champion Columbine (2-1 in the Dave Sander Memorial Tournament), and were a perfect 14-0 in the Tri-Valley League.

Led by seniors Anna Martinez and Noelle Gardon, the Tigers earned the No. 2 seed entering the Class 4A regional tournament and beat Falcon (16-0) and Mountain View (4-0 in a rematch of the 2018 state title game) in the regional round to earn a trip back to Aurora Sports Park and the state tournament.

They had little trouble on Day 1 of the tournament, rolling though Mesa Ridge (19-0) and Pueblo Central (5-3) to set up a semifinal date with Tri-Valley League rival Erie.

Holy Family had already beaten Erie twice during the regular season, but the third time was a charm for Erie. They jumped out to a 5-1 lead early and never looked back en route to a 9-5 victory and eventually a state title later in the afternoon.

“It’s been a roller coaster and none of the years have been the same and all of the teams have been different and had different experiences with all of them,” said Gardon, who recapped her four year run with the Tigers. “But I wouldn’t change any of them for the world.”

The Tigers had three players hit over .500 this season, led by sophomore catcher Abby Edwards (.526). Junior Carly Eldredge and Anna Martinez did as well. 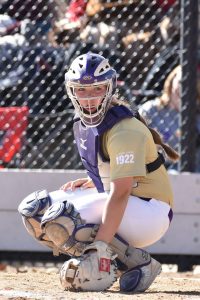 What a remarkable run (pun intended).

Especially for the Holy Family girls.

The Tigers, who will graduate just one senior, Thomas, dominated the Tri-Valley League Championships, going 1-2-3-4 and easily winning the team title. Boyd, just a sophomore, was the top finished that day at Frederick.

They would carry the momentum over to the regional meet in Denver, and finished second to Faith Christian.

Against one of the deepest fields in all classifications, the Tigers held their own at state – located at the Norris Penrose Event Center in Colorado Springs – ultimately finishing sixth overall. Boyd was again the top finisher, crossing in a time of 20 minutes, 6.9 seconds, good for 14th overall. Thomas capped her senior season with a 31st place finish in 20:41.0.

On the boys side, junior Jack Culp was the Tigers top harrier. At both the Tri-Valley League meet and the Regional meet, he finished third – going a speedy 16:50 at Frederick. 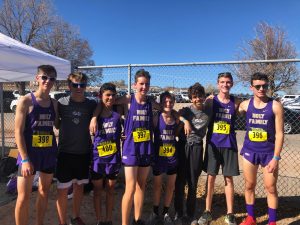 The boys would also qualify as a team for state, and again led by Culp’s 14th place finish in 17:16.5 would take 11th place overall. The Tigers will have their entire state qualifying team back next season, including Andrew Descalzo, Micah Munoz, Luke Hixson, Anthony Haberkorn, Jacob Vigil and Patrick Cavanaugh.

It was easily on of the most confounding seasons in recent memory for a program that has made multiple runs to the state tournament over the last decade.

Coming off of a Final Four appearance in 2018, the Tigers entered 2019 with high hopes after a preseason No. 2 ranking from the state association.

But after just two wins in their first eight matches, the Tigers found themselves in a hole. After 15 games, there were sitting at 5-10 and visions of a regional playoff berth seemed out of the question.

But behind Tri-Valley League Player of the Year Peyton Frank, the Tigers rallied to win seven of their final eight matches to finish the regular season 12-11 and earned a trip to Coronado High School in Colorado Springs for the regional tournament and an unlikely spot in the state tournament.

After taking the first match at regionals from The Classical Academy, Holy Family was just one match away and had to take down the host Cougars to punch their ticket. 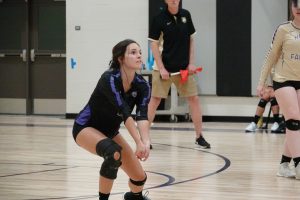 But Coronado proved to be too much, and the Tigers – after evening the match at 1-1, lost in four.

“We just haven’t been 100 percent all week, and we didn’t not have a single practice with everybody there,” said Tigers head coach Krista Solomon after the match. “That is how championship volleyball is won, by playing the best you can everyday no matter if you are full strength or not.”

It will be a new-look Tigers team in 2020 after graduating six seniors.

The game of golf can be so fickle.

One day you have it and the next it is gone.

Holy Family had everything working for them at the right time of the season in 2019. They closed out the Tri-Valley League portion of their schedule by winning the final two tournaments and winning the league stroke title by four shots over Frederick.

The foursome of Jacob Mason, Jackson Grace, Garrett Green and Leo Nelson carried that over to a victory at the Class 3A Region 2 tournament at Deer Creek Golf Club against what was the arguably the best regional field in the state.

And even after a lackluster Day 1 of the state tournament at the Eisenhower Blue Course on the base of the United State Air Force Academy that had them alone in second place just three shots behind Lutheran and Aspen, it felt like the Tigers had something special up their sleeve.

Here’s where that fickle part comes into play.

The greens at Eisenhower had their way with the Tigers, especially down the stretch on Day 2, and despite leading after 27 holes, couldn’t hold on down the stretch and ultimately settled for a second place finish behind Lutheran. 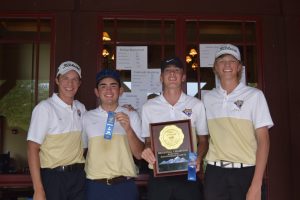 “We came up a little bit short, but it was a great team effort, and at the end of the day, we should be proud of what we accomplished,” said Mason after the round.

Mason, who signed to continue his playing career at the University of Colorado, rallied on Day 2 to finish third overall and was the Player of the Year in the Tri-Valley League. Both Green and Nelson also earned All-Conference honors.

After nearly a decade away from competitive competition, the Holy Family cheer team returned with a bang.

Competing in the newly formed Game Day discipline, the Tigers won the Tri-Valley/Northern League title at Erie in October. Not only did they win the Game Day Division, they were also named the Grand Champion as the overall best performance of the event.

In December, head coach Lucy Nash took her girls to the state tournament at the Denver Coliseum with high hopes of making the finals.

And in front of their biggest audience all season, the Tigers didn’t disappoint.

“They were amazing, they represented their school and themselves,” Nash said. “They were just incredible.” 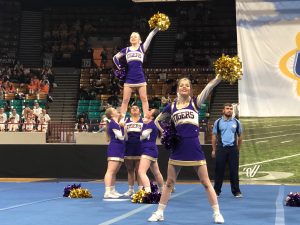 Their score of 88.85 would have placed them comfortably in the top eight of the 5A/4A competition and landed them in the finals, but they were docked a massive 10 points after judges ruled they violated a rule that had been put into place less than a two weeks prior to the state meet.

It was a bitter pill to swallow for the Tigers, who Nash said will be back and better than ever in 2020.

Holy Family had two gymnasts compete for other schools and qualify for the state meet at Thornton High School in November. 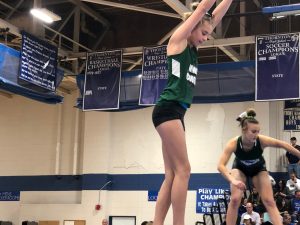 Sophomore Bridget Gray competed for the team at Mountain Range and at state scored an 8.9 on the vault in the preliminaries and did not make it back to the individual apparatus finals.

Freshman Ava Silverstein was a member of the team at Niwot and competed in the state meet on both the beam (8.55 at state) and on the uneven bars.

Even though it is not a sanctioned sport at Holy Family, it doesn’t stop out kids from being able to play at other places.

Junior Will Thomas went 7-1 this season as a part of Denver East’s Varsity II team. 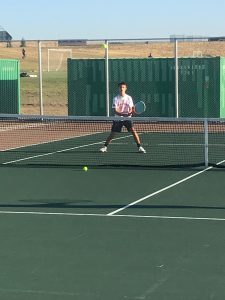