LONGMONT — We have come to expect a certain level of play when it comes to Hailey Schalk.

The two-time Class 3A state champion has given us no reason to think otherwise.

That’s why Monday at The Fox Hill Club in Longmont, those watching in person or on their phones were a little taken aback by a tough start. The Holy Family junior triple bogeyed her third hole, followed it with another bogey on No. 4 and after just four holes was a an eye-popping 4-over par.

But, like the good ones do, she found a way. She birdied No. 5 five to right the ship and avoided really big numbers the rest of the way. And on a day, when she clearly wasn’t her best, her 6-over par 78 was still good enough to win the Class 4A Region 3 tournament by two shots over four other players, including her teammate Jessica Mason.

“It wasn’t all bad. It was just a rough day,” said Schalk, who will have a chance at state title No. 3 in two weeks at Windsor’s Pelican Lakes Golf Course. “I think I hit just three fairways all day.”

It wasn’t nerves, because, lets face it, she’s played in a lot of big tournaments all over the country. So what was it about a lazy Monday afternoon in May.

“I felt like I was hitting the ball great on the range and I’ve been playing pretty good lately,” she said. “It was just one of those days. I definitely wanted to play well today, but the ultimate goal was getting me and the team to state.”

On a day when the top two teams automatically qualify for the state tournament, the Tigers just missed out on the No. 2 spot, finishing three shots behind Niwot. Windsor cruised to the team title with a score of 247 and Niwot was second at 260.

Mason steadied herself after a rough outward nine that saw her card an 8-over 43. On the back she birdied No. 11 and only bogeyed the short par-4 16th to come home in even par 37. 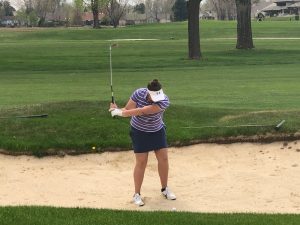