LONGMONT — Benny Hernandez is back.

After battling the affects of concussion at the start of the season, the 160-pound sophomore returned last Saturday at Niwot’s Gary Daum tournament where he went 2-2.

On Wednesday night at Skyline, Hernandez posted his biggest win of the young season with an impressive pinfall victory over Creighton Trembly at the 3:36 mark of the second period.

“It was a gratifying win, but I would rather see all of my teammates win too,” said Hernandez, whose team dropped a 48-35 decision to the Falcons – made a little more painful by the fact three Tigers missed weight before the dual. “I bet if we had those guys, that would be a different score.”

What made Hernandez’s victory that much sweeter was the fact that he was down in the match when he got Trembly to his back. The Skyline junior was up 5-2 midway through the second period when Hernandez turned the tables. He scored a take-down of his own and instantly had his opponent on his back and it wasn’t long before the official was slapping the mat.

“I thought he was going to get me, but I just had to keep on fighting,” said Hernandez, whose team will compete this weekend at Englewood High School. “I got on top and it was over.”

Still it was the whole team aspect that Hernandez was quick to talk about as he looked up at the scoreboard, knowing that it could have been a different result. He knows it is on the leaders of his team to make sure that doesn’t happen again going forward.

“I think when they look at that score, they should get on them,” he said. “Because that is a winnable dual.”

It was banner night for several of the young Tigers on first-year coach Jason Pedigo’s team. Junior Christian Florez had his way with Skyline freshman Nate Gelles at 120 pounds. 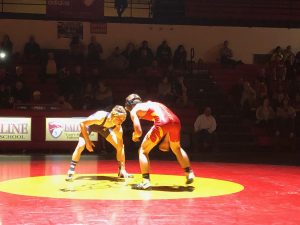 He scored a victory via technical fall, 17-2 (5:20), in the third period. Florez managed just two take-downs, but racked 11 near fall points throughout the match.

Adam Bartloletta followed at 126-pounds and made quick work of Jesse Valentino. After giving up the initial take-down, Bartoletta reversed and finished the match at the 1:04 mark of the first period.

Junior Jackson Fuller also scored a first period pin over Isiah Rivas at 1:45 and Joe Szymanski hardly broke a sweat in his match at 152-pounds. After a third place finish over the weekend at Niwot, Szymanski was on and off the mat in 19 seconds against Joe Basil.

Junior Hunter Branson, who watched his opponent make weight before the match, was told just after warm-ups that he would not wrestle and received a forfeit victory.